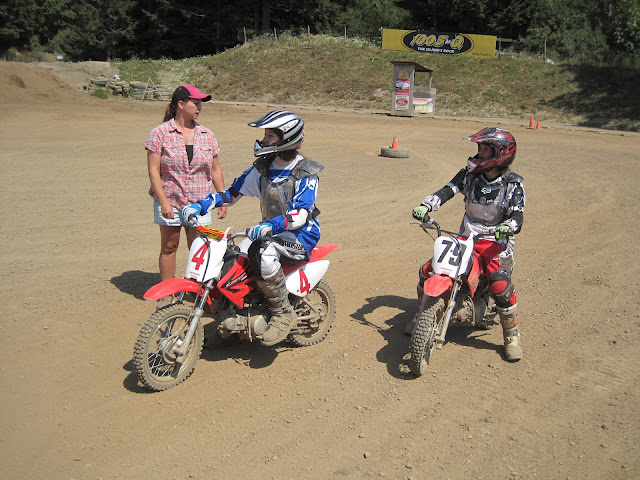 Motor Jr is on the left in the blue and white gear, her best friend G is in the red gear.
Today was adventure day in Scooterpie World.  Motorcycle Man took Moto Jr and her best friend out to try a day in the dirt.  Westshore Motocross had a women's day and it was a great way to introduce Moto Jr another avenue of riding.  I have heard it from many that riding in the dirt is a great way to learn to ride and how to handle a bike.  I was working today, but managed to sneak out and watch.  Traffic was a bear and I thought I was going to miss the whole event.  I have been so excited for her and we have both been looking forward to today.  This was a great experience and it only cost me $30 for 2 hours of riding, a lesson, full gear rental and a bike to ride.  It looked really fun, I think next week I might just give the dirt a whirl myself. 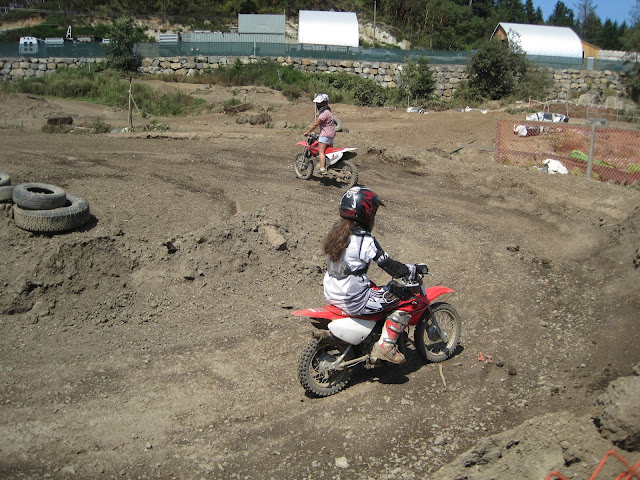 G burning up the track 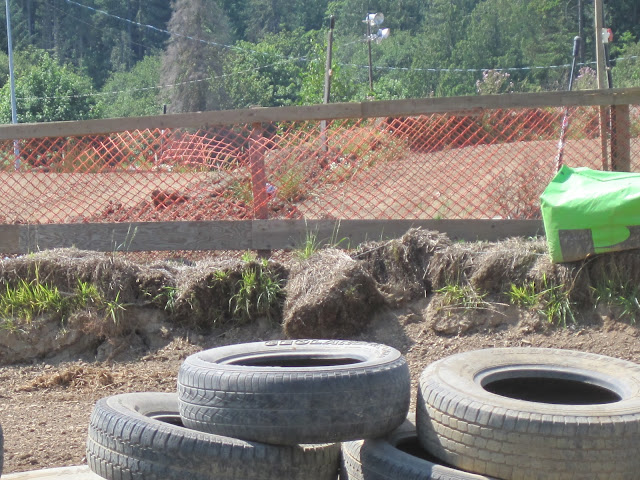 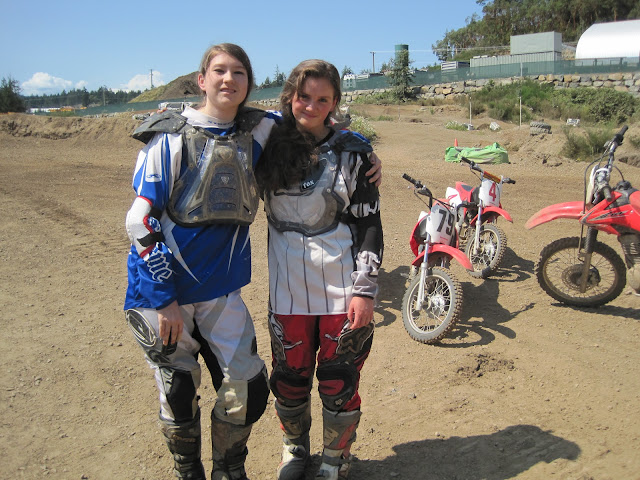 Both girls loved it!  My daughter loves the puddles and definitely was not shy going through it.  Just what I hoped, she went at it with gusto!!!  Yup I definitely see another moto diva in the family! 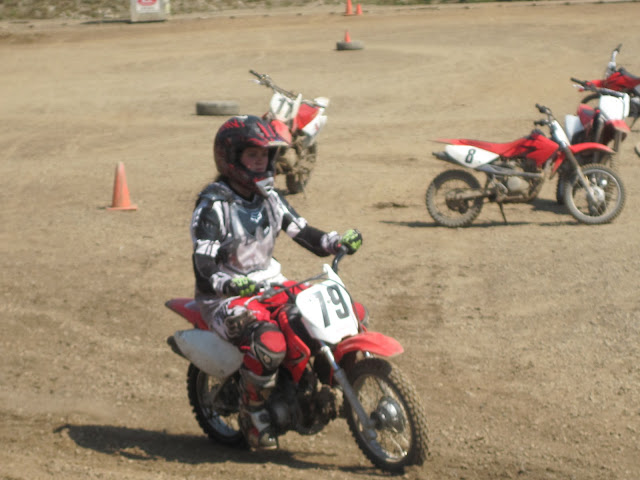 G concentrating on an upcoming curve. 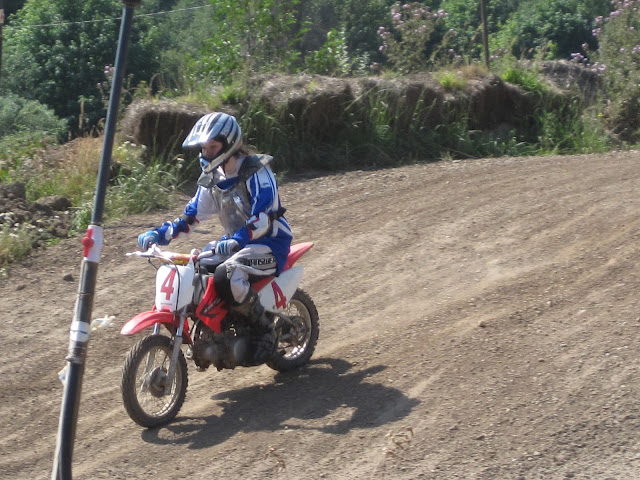 Moto Jr coming over the hill and dare I say she caught a little air! 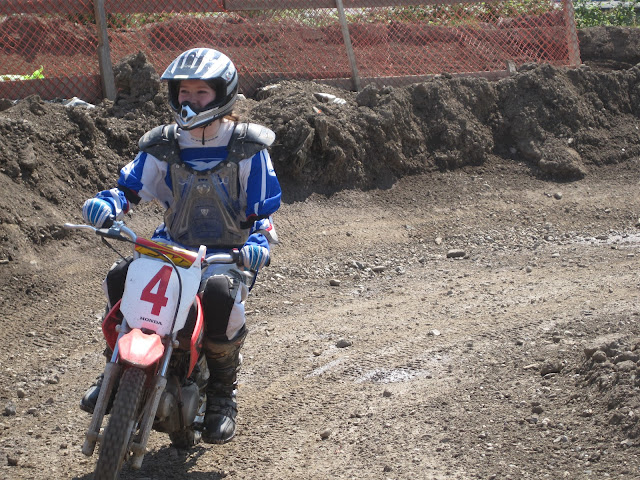 Look at that grin under the helmet!!!!! 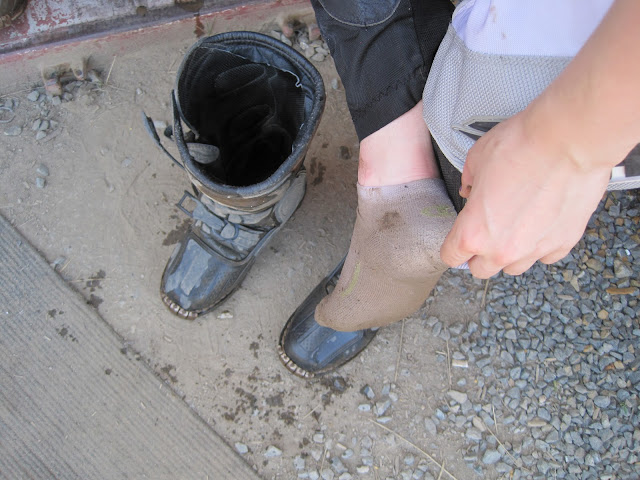 Puddle Queen, every time she went around the track she forged her way through the giant puddle.  Yup there was half the puddle inside the boots.  For kicks after we got home we went to a local dealer just to have a peek at gear.  I think we will be going back in the near future.
Posted by Dar at 6:26 PM 14 comments:

Email ThisBlogThis!Share to TwitterShare to FacebookShare to Pinterest
Labels: Dirt

A lid fit for a Princess - Princess Scooterpie that is...


When I started scootering I fell in love with gear that was pink, most of it was because I thought it looked feminine and I didn't have any desire to have a helmet with skulls all over it.  Don't get me wrong I think a good skull and crossbones has its place, just not on my helmet.  The luster of pink quickly wore off and decided that I wanted an upgrade.  When I purchased my current HJC helmet I was having a hard time finding one that fit and ended up with a youth extra large - it fit well & was comfortable. In the beginning I was spending lots of money trying to get outfitted for riding and a Shoei was on my dream list, but was out of my budget.  I bought entry level gear and was disappointed with the results; jackets, pants, boots leaking and the helmet noise beyond acceptable. I have learned a valuable lesson when purchasing gear, spend a little more and get what you want because the next level up of gear will more than pay for itself.
I have had my eyes on a Shoei Goddess Quest in white.  I have oogled and ogled, drooled and wished for this helmet, tried it on several times and it was PERFECT!  I decided a few months back to start saving for it, because my old HJC was getting pretty beat up, the chin strap was starting to fray, the liner was grimy because I happened to be a girly girl and wear make-up.
I was just getting ready to go plunk down my hard earned dollars and buy the coveted helmet of my dreams, when a friend told me about a helmet he had bought for his kid, but made the huge mistake of not taking said child to try it on before purchasing. With most motorcycle dealers helmets are non-refundable and he was stuck with a $500+ helmet. It still had the transparent protective vinyl on the visor - never been worn.
It was like a case of Cinderella and the ugly step sisters trying to cram their feet into the glass slipper.  I tried it on and IT FIT!!!  It isn't the Goddess Qwest, but an RF1100 Sylvan.  I love the graphics and the helmet is full of sparkles which sings to the inner diva in me and the pattern reminds me of gossamer dragon fly wings and there is a diamond jewel pattern on the top. It kind of reminds me of an elaborate Mardi Gras mask. Oh my!  Here is the best part, when I asked him how much he wanted he said $100. I said "REALLY?!"  He said "Yup"  I handed him the money, squealed with delight and off I went.  I could not believe it!!!!  I have checked the helmet out on-line and a few local retailers, it is going from about $500 to $680.  Ka-ching! WOW!!!  I love it when the Moto Fairy Godmother sprinkles pixie dust. The best part is the money I would have spent on the Goddess I used to buy Motorcycle Man a present, I bought him an Olympia MOAB jacket and he was thrilled.
Now for my technical part of the discussion.  The helmet came with a chin curtain, removable washable liners, has plenty of venting and a fabulous anti-scratch coat on the visor.  The best part is it is extremely quiet when you are doing 90 clicks down the highway.  My old helmet was very noisy and starting to affect my hearing, it was almost as if you were in a hurricane that is how loud it was.  I am still breaking in the cheek pads, from what I have read they will compress after a week or so of wear.  I went for a long afternoon ride after I got it and there were no tender spots on my forehead or head anywhere.  I am one very happy Princess Scooterpie - my new lid makes me feel more like a Queen. 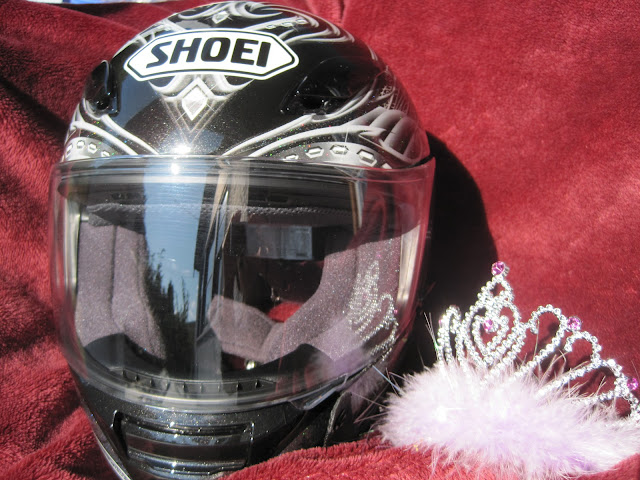 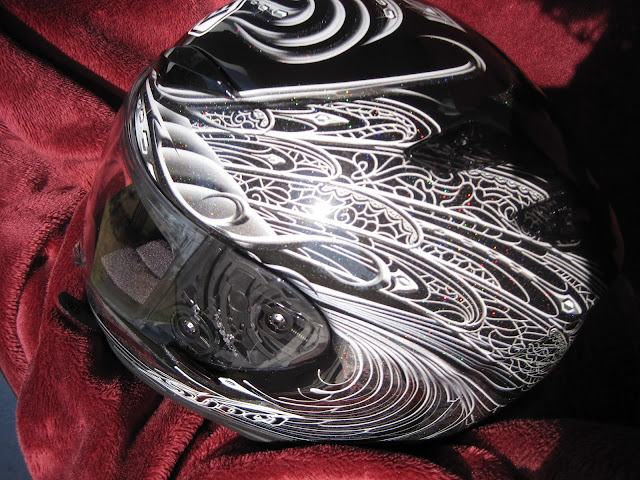 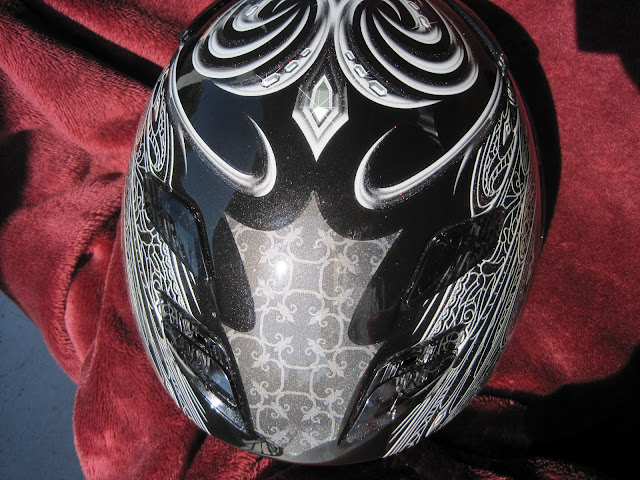 Blog challenge! It's an easy one!

Evening stroll along the Westsong walkway in Victoria 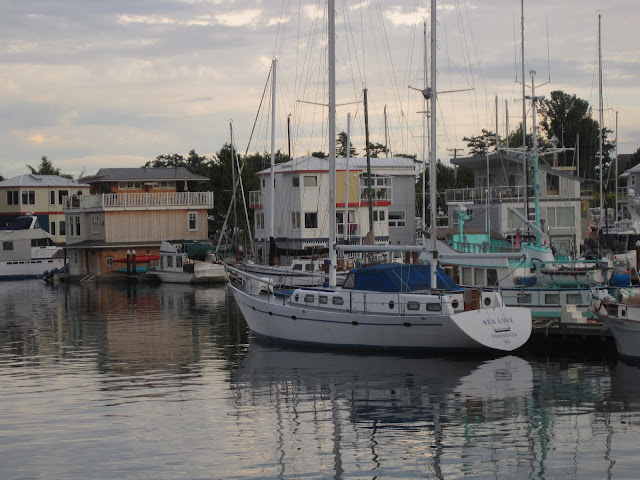 Victoria is beautiful, particularly in the summer months.  The island comes alive and everyone is outdoors.  Like Martha Living Among Tourists, I also live in a tourist destination which is particularly busy in the summer months.  Here are some photos I took while out on an evening power walk with my hubby.  My walk starts out at West Bay by the floathome community - I was lucky enough to live on a house moored here for 10 years.  I really miss sitting out on the deck and watching the world from my little paradise.  I am blessed however to still live here and go strolling on this walkway, it goes from Esquimalt to downtown Victoria and you can connect up with it on the other side of the harbour. Enjoy my evening walk with my hubby. 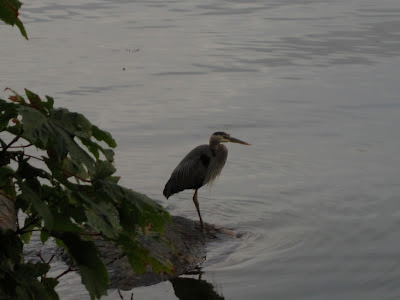 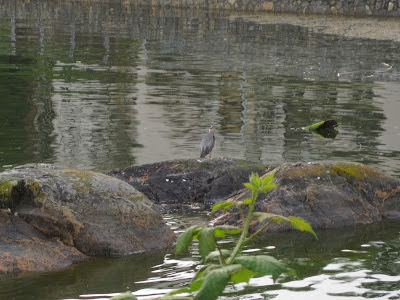 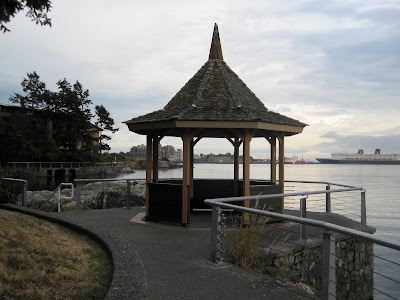 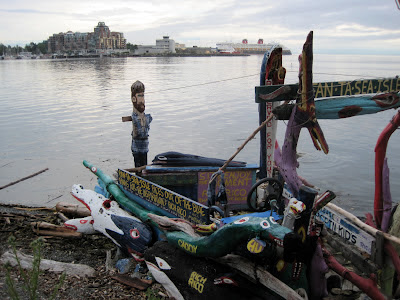 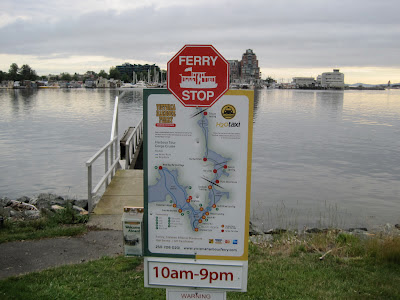 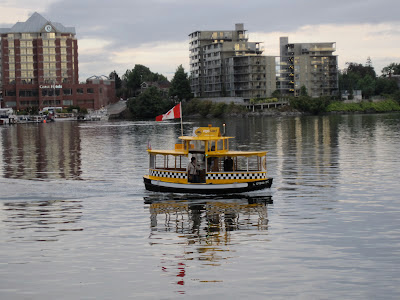 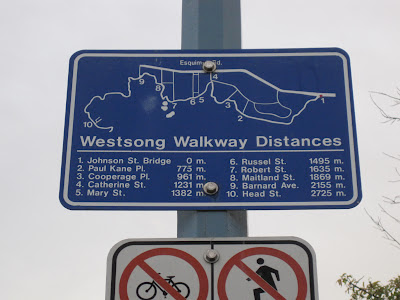