Relax you can stop blushing now!
A 'Tiddler' is a vintage bike 25 years or older and 250ccs and under.
﻿ 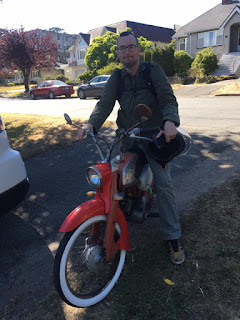 ﻿
This is my friend Jason on his vintage 1964, 2 stroke, 50cc, Suzuki N15.  The bike is a family heirloom with a very rusty patina and it is showing it's 53 years, it needs a little TLC and moto-botox! Finally something a little rustier than me! ﻿ 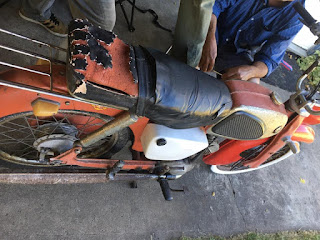 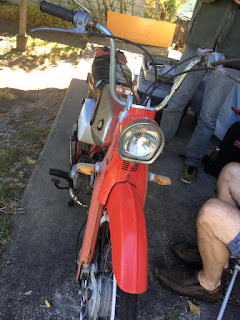 ﻿
That is quite a daily commute for a 50cc bike!  Can you just imagine the whine of the motor and probably more than a few nervous moments.  I can picture Jason's dad as a young man riding this gnarly little Suzi over the might Hope Princeton. 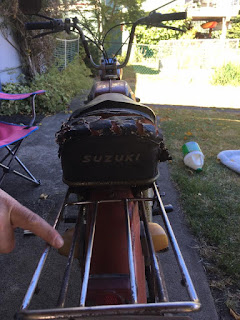 This little bike has had it's share of adventure, but sadly the adventure ended in 1969, Jason's pop lent the intrepid little Suzi to a friend and heaccidentally drove it off a 6 foot cliff and bent the bars. 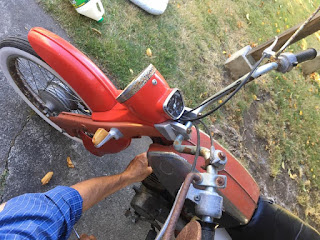 After her unfortunate accident she was relegated to moto hibernation in the barn and didn't see the light of day until 1980! Jason's Grandpa loaded the bike in a truck and hauled it to Victoria, where Jason took it with him from place to place in storage. 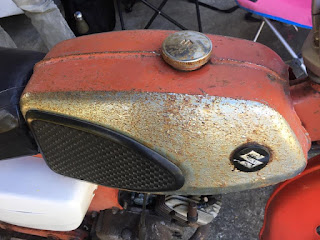 Finally in the winter of 2017 Suzi made a brief stop at my house and my hubby took a crack at getting it running.  Lots of parts were seized, corroded, and generally in bad shape.  My hub loves challenges when it comes to this type of stuff.  Through his dogged persistence and a little TLC he managed to get it to turn over and actually run.  He took things apart, cleaned them, and soaked a few things in pine sol (that's his magic potion). 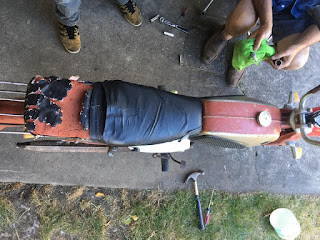 Last Friday Jason dropped by surprisingly he was riding down the street with the whine and cough of the 2 stroke and a trail of smoke belching out the exhaust.  The mix was off and needed a little tweaking. It was also leaking a little gas and the spark plug gap was off. 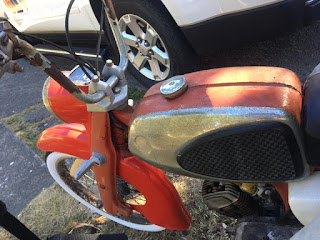 Check out the roachy rusty patina on this bike.  Jason is doing a partial restoration on the bike, but the rusty patina lends a certain charm.  Probably the biggest restoration is going to be the seat being recovered and possibly a few of the parts rechromed, but the paint is going to stay as it is at this point.  It is a cool looking little thing.  Jason is happily riding around and plans to hand it down to his kids when he is done, who know maybe they will decide to restore it a little more.   The last time this bike was insured and on the road was in 1969! All I can say is keep on running old lady you aren't looking too bad for 53 considering what she has been through!﻿