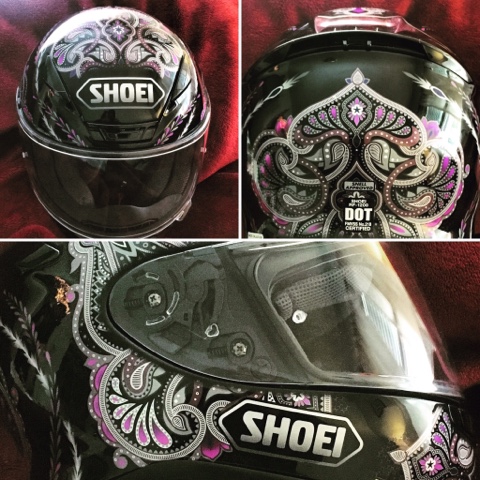 Sometimes when you see something you really do need to splurge.  I was probably going to replace my helmet in the next 10-12 months, next June it will have been 5 years since my RF1100 was purchased.  I wear my helmet a lot, probably more than the average seasonal rider.  Teaching takes it toll with lots of wear, sweating, etc.  Even with washing the headliner it still degrades the foam core. So the research process began, fullface versus modular.  I am still concerned about modular helmets in a crash and worry about chinbar failure, I prefer a homogenous piece around my chin. 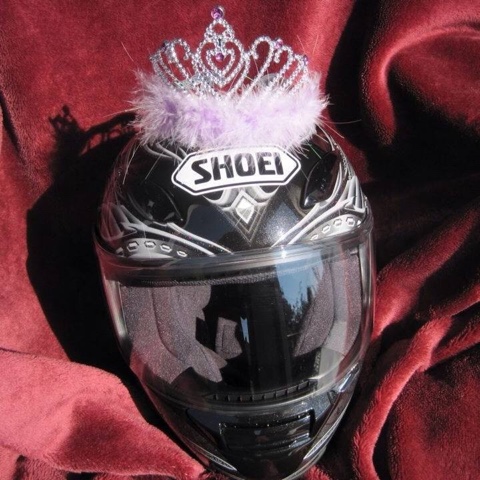 My RF1100 was an amazing fit for me and it turned me into a Shoei helmet lover. Its quieter than my first helmet, which was an HJC.  I've been poking around since the motorcycle show in January, which was the perfect opportunity to try multiple brands and styles, fullface and modular.  I tried some of the other big guns of the helmet world and went back to Shoei, it fits me great, its quiet and well ventilated. Now it was just a question of style and colour. I was actually going to go with a plain white or silver, but of course the inner bling crow comes out. 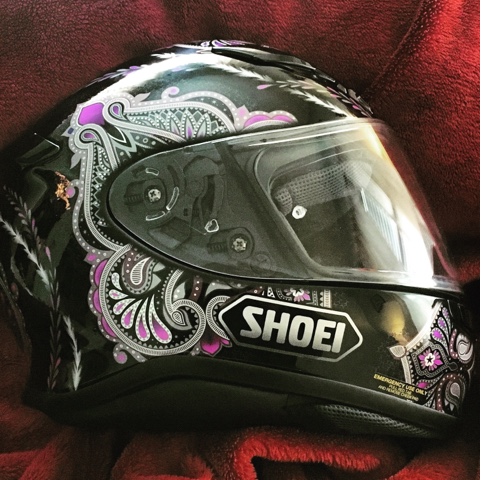 A few months back I did see this helmet in white, but was indecisive and waited too long - Boo! Some other lucky rider snatched it up. 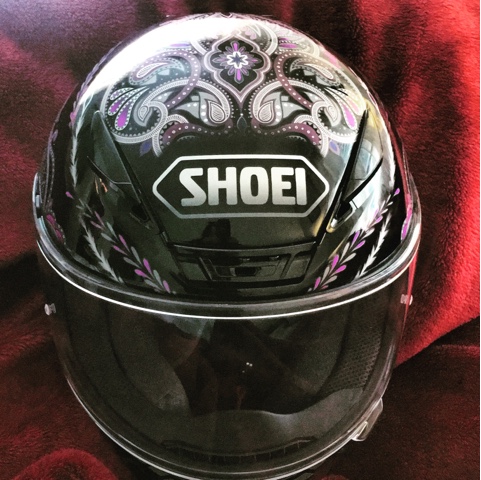 This has a beautiful paisley inspired desigh with silver and purple and a touch of blue. Its not very reflective, going to remedy that with a bit of thin pin striping reflective tape around the base I think.  I fell in love with it and it ticked all the boxes for safety and features, light weight, great shield, perfect venting, quiet, and comfortable. 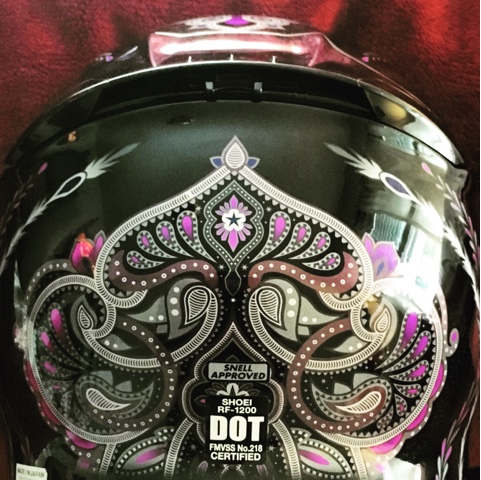 This is an upgrade over my RF1100, they've changed the design, made it a bit sleeker, lighter, and changed the venting a bit.  They have also added quick release emergency pull tabs for the cheek pads.Shoei has also included a pinlock visor, which was an added bonus. 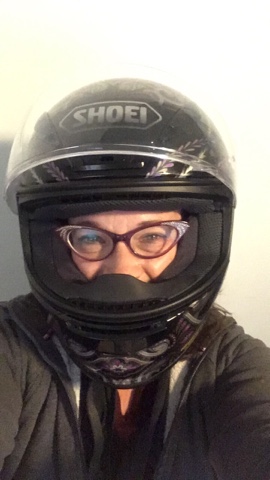 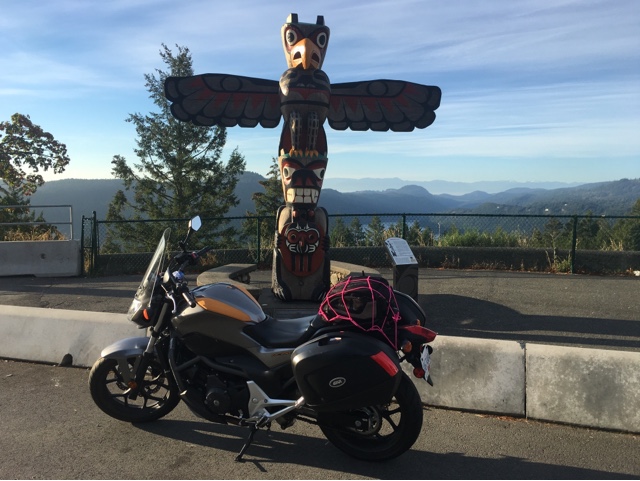 Friday was the beginning of a weekend of adventure with a solo ride through twisty heaven - the Pacific Rim Highway into beautiful Tofino.  I have been itching to do this ride for quite awhile, but it seems every year I run out of summer time do it, and I finally did! 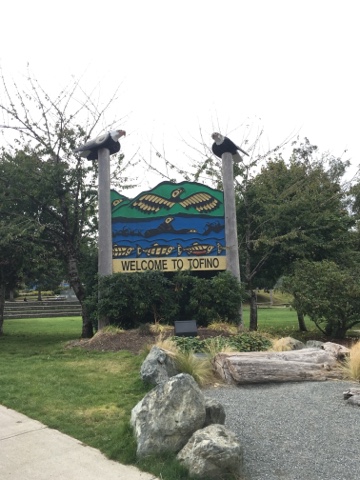 My holidays didn't quite match with my hubs, he packed up our Westfalia and headed off to Tofino for a week of camping.  I decided if the weather looked  promising I would ride up and surprise him.  I eyed the forecast and it was sunny/cloudy with temps in the high teens and low 20's, which is still summery in these parts. It ended up being a surprise as well all due to electronic technology, I was talking to him Thursday on facetime and said "I'll see you tomorrow" and I guess he thought I was going to facetime him again, boy was he surprised when I showed up. 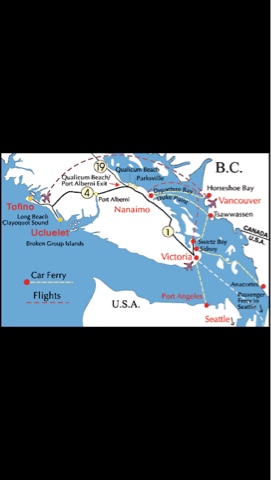 The route from Victoria to Tofino is about 317km which  is about 4 1/2 hours riding time. 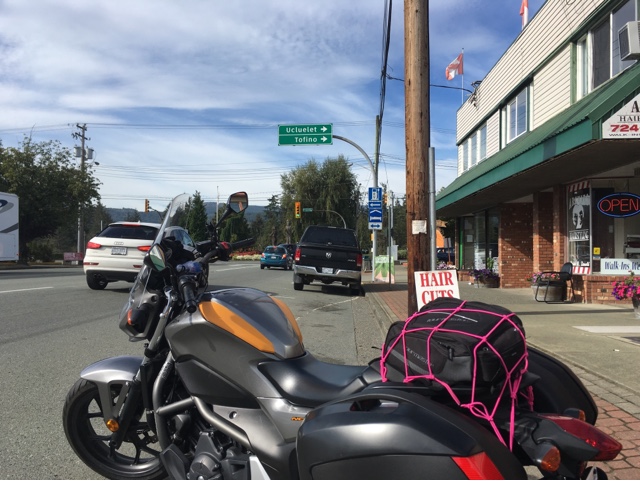 I stopped in Port Alberni for a much needed cup of coffee to warm up, it was sunny, but in the low teens, I was wearing lots of layers and was a little cold still, in fact so chilly I had to add an extra layer, but warmed up after the ginormous cup of coffee.  I topped up the gas and after that I was ready to venture over highway 4 and twisty heaven. I actually packed light because I was hauling the hub's gear to surprise him so we could go for a ride and he could ride the bike home. 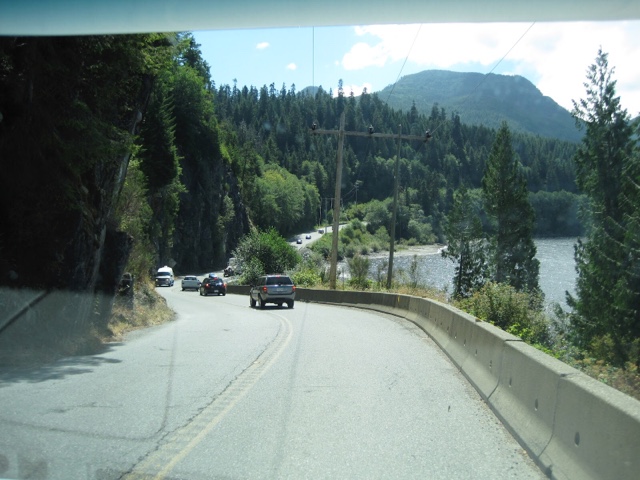 Highway 4 into Tofino is very scenic with steep hills, twists, and sharp corners. Its pretty much motorcycle nirvana.  Its easy to get distracted as you ride down the hill towards Kennedy Lake and then on towards Clayquot Sound. The scenery is breathtaking, I had to say to myself "head and eyes up, look through the turn, concentrate" Yes, I was that distracted!  You also have to constantly be watching for RVs because there are a lot of them and most of them loaded with people who aren't used to driving them and not used to mountainous driving terrain.  You just have to believe me that it is one of the best twisty roads on the Island! 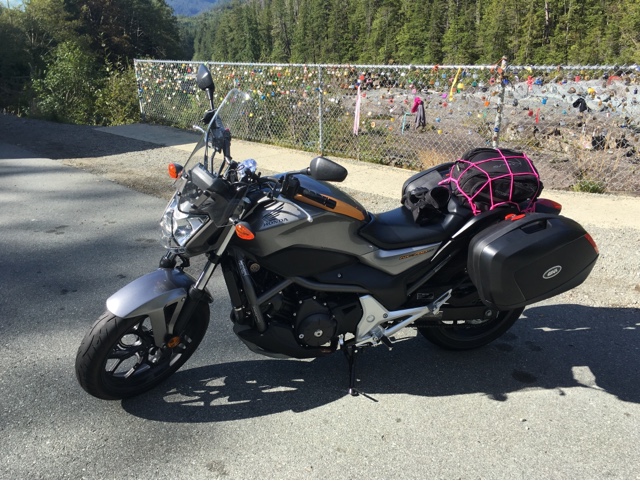 I stopped at one of my favourite spots on the ride, the viewpoint at the Ellis River. The waterfalls, pools, and rock formations are spectacular, you usually can't stop because it is so busy. The gate behind the bike is loaded with locks with initials and dates and other personal momentos. 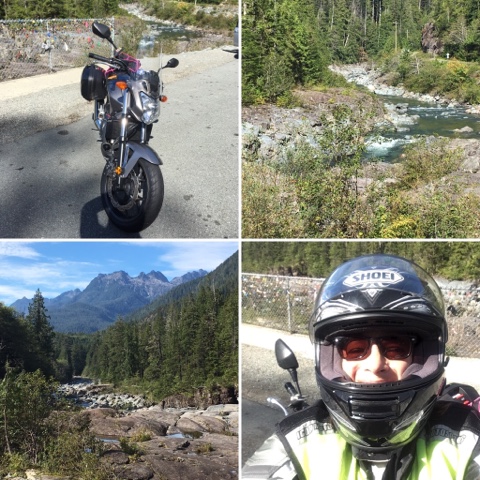 I didn't linger too long here, I was anxious  to get to my destination and soak up as much Tofino time as I could. 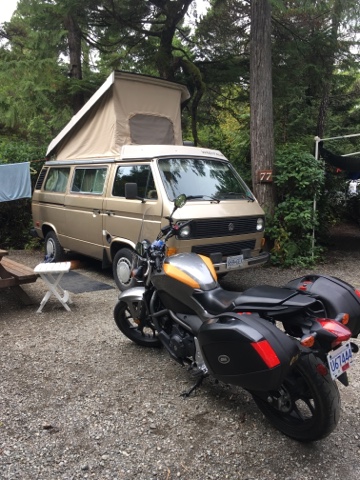 Our Westfalia "GoldZilla"  and The Duchess.
I arrived at my destination and no one was home! I left about 7:30am and got in about 12:30 because of two patches of road construction.  I wandered around, rootled through the cupboards and realized the cupboards were a little sparse, so off I went to forage for lunch in Tofino and walk about. 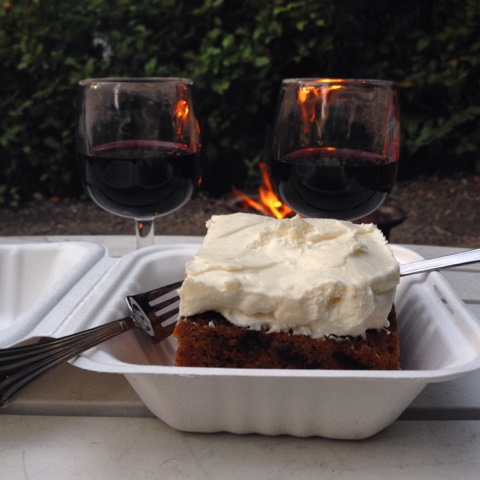 I ended up stopping at a few of my favourite foodie stops and was grazing along the way.  This is the best carrot cake on Vancouver Island from The Red Can Gourmet.  A little more poking around and then back to the camper and find the hubby. The hubby was very surprised and happy to see me!  He was even more impressed when I told him all his riding gear was on board and that he was going to ride the bike out of Tofino on the return trip.
Posted by Dar at 9:17 PM 10 comments:

Email ThisBlogThis!Share to TwitterShare to FacebookShare to Pinterest
Labels: motorcycle

New Episode of Farkle Garage Ep7- A whole lot of riding going on!

The crew of Farkle Garage is a small dedicated group who create this amazing little motorcycle show through public access television at a local Victoria station Shaw TV. We are  guided through the process by Executive Producer Paul Beilstein, who is aided by technical producer Orlan Carillo and Co-host Kim Rock.  Co-host Dar Duncan, Steve Drane and Clive Brown are volunteer producers and hosts.  The show is put together with the many talents of volunteers, camera people Kelly F, Chris W and Daniel, sound Will and slate lady extraordinare Carolyn.  And of course the amazing sounds of The  Farkle Garage Band, Ken, Jack, and Scotty - Rock on!

Here is the jammed packed episode 7 which includes the FG crew riding 'The Loop' as the locals call it, or for those looking on a map The Pacific Circle Marine Loop. Next Meet Chantelle and Todd Powell who are riding Honda CT110 Posties the durable little work horses of the Australian Postal service. Then we meet Adventurers Brian and Deyanira Domingues who rode through South America, and Neale Bayly a moto journalist and writer and producer of MAV TV and founder of Neale Bayly Rides, a chartiable organization that helps children aound the world. Last but not least we see Canadian Motorcycle Hall Of Famer Steve Drane rippin' it on the track!

So pull up a chair and hang out with us in Farkle Garage for about 30 minutes!