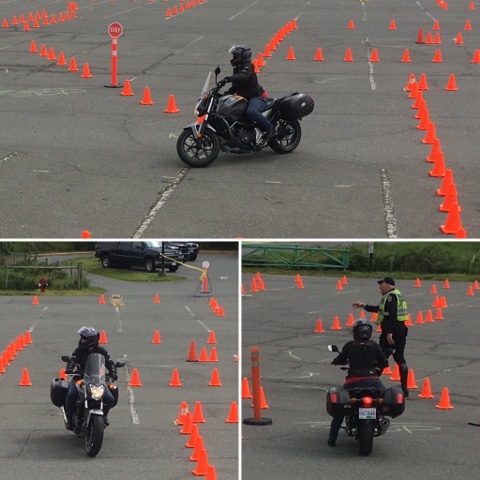 This was me getting instruction from a master police rider in the advanced layout and yes he told me to "Turn your head!"
I admit it, I'm a moto nerd.  I love traffic cones, particularly when they're in intricate slow speed layouts.  This weekend I participated in a Motorcycle Skills Challenge event put on by 3 local police departments, provincial insurance corporation and the riding school I teach for, I was there as an instructor coach.  I also took the opportunity to take a few runs through the cones. 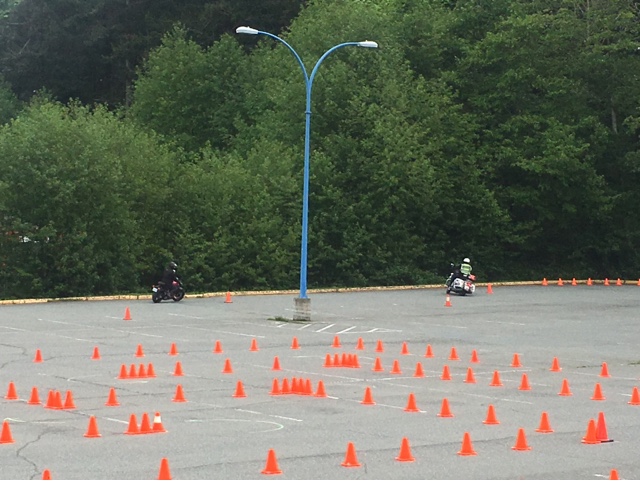 This event started last year at the beginning of riding season to help get riders road ready and introduce them to the concept of regular skill building practice and opportunities for training and safer choices. It was gratifying to see such a broad spectrum of riders come out and participate. The range of bikes was incredible; scooters, Honda groms, adventure bikes, dirt, sport bikes, and ginormous cruisers. 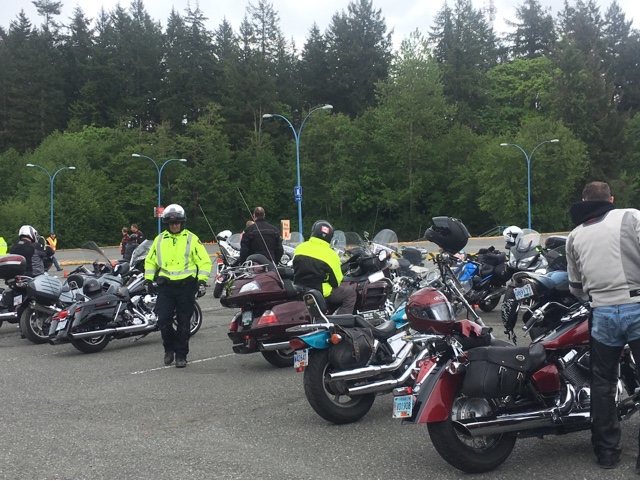 As an instructor it is rewarding helping people gain new skills and for others helping them refine their skills.  At times it was an eye opener of the lack of training some riders have and seeing the realization that they need further training to up their skill set. 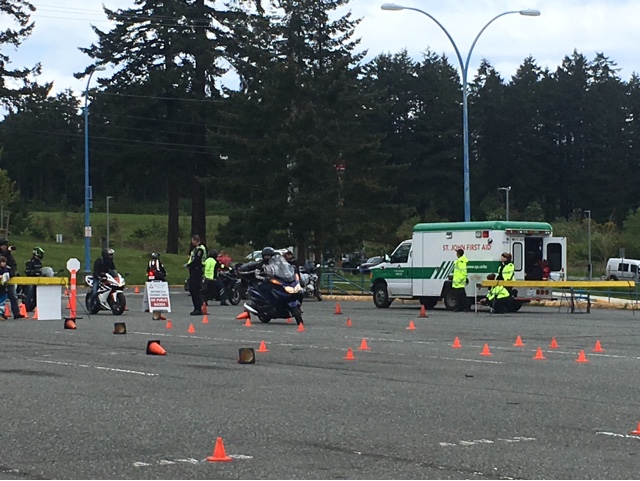 The most rewarding moment was when I was up at the WSP cone layout which was created by The Washington State Police. The layout is a large circle with 2 cones in the centre and the rider performs a figure 8 on the inside of the circle trying not to go out of bounds as they do each loop of the 8. There was one rider who rode the entire beginner circuit and each time the figure 8 and uturns were his nemesis, but his dogged determination was tremendously inspiring and I worked harder to help him improve and work on sightlines and friction zone.  We chatted for a bit and he was so grateful and he was showing improvement.

It is these moments when I realize how encouragement and upbeat positivity can affect a rider who may be struggling, they generally just need more one on one instruction, seat time, and confidence building.  It also opens your eyes to the fact that some riders just don't know what to practice or how often. My advice to him was to get some tennis balls, cut them in half and use them as markers, go to a lot and practice u-turns, slaloms, smooth starts and quick stops. The most consistent problem for most riders is keeping their head and eyes up and 'looking where you want to go", the next would be smooth use of the friction zone when riding slow. These are the bread and butter skills of every rider.

It was a good day and I think about 100 riders came out and took advantage of the instructor coaching and riding through the sea of orange cones.

I am off to teach a new flock of riders this weekend, I'm stoked! 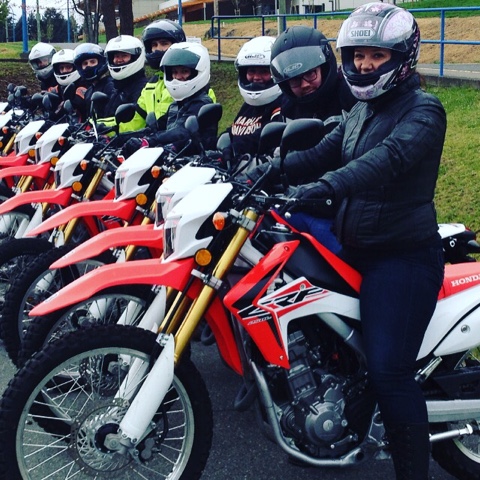 Email ThisBlogThis!Share to TwitterShare to FacebookShare to Pinterest
Labels: motocycle

Blast from the past - Riding Pillion

Yesterday I rode pillion, I haven't really done this since I earned my motorcycle license.  We have two motorcycles in our garage and only one of them is insured - and it's mine. Once upon a time, on lovely summer days back in the '80's you would find me and then boyfriend riding all over Northern BC.  Those were heady days, we used to go everywhere on his bike!  I continued to ride on the back off/on over the years, but that seemed to pretty much come to an end when we had our kiddo, it wasn't practical and it didn't lend itself to much riding time. 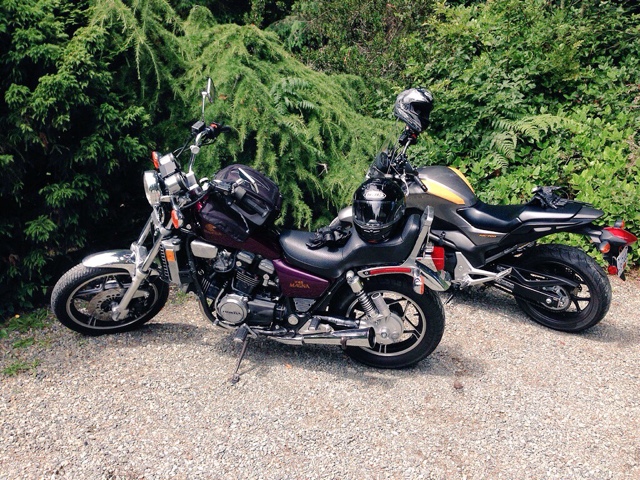 The cruiser is my hubby's bike Honda V45 Magna, he's had it since 1983, he used to pick me up for dates on that baby and I'd hop on and away we'd go!
At one time I was a great pillion passenger, you couldn't ask for better. I never fidgeted or leaned the wrong way.  For the most part I was very content, although my view was mostly obscured by the back of the hub's head.   I loved nothing more on a hot summer day to go for a ride on some twisties.  It was the time of my youth and bck then there really was no motorcycle gear to speak of and I shudder at our lack of gear.  I rode on the back of the bike for 28 years and then all of that changed when Pandora's moto box was opened with the scooter. 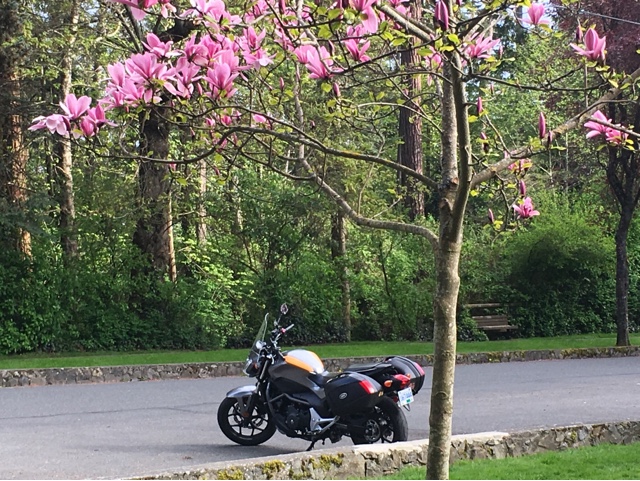 My impressions of my experience of riding pillion I would have to say it feels very odd sitting on the back. K said that when I have ridden on the back on two occasions that I am squirmy now.  He says he can feel my hands twitch when he shifts, brakes, and rolls on/off the throttle.  He he says he can feel my left foot wiggle around when you would be throwing in a shift, it's reflexive.  My bike also has a very unforgiving passenger seat and does not have a sissybar, I felt like I was going to slide off.  Its funny I didn't enjoy the ride as much as I used to and actually felt anxious for some odd reason, its hard now to give up control. 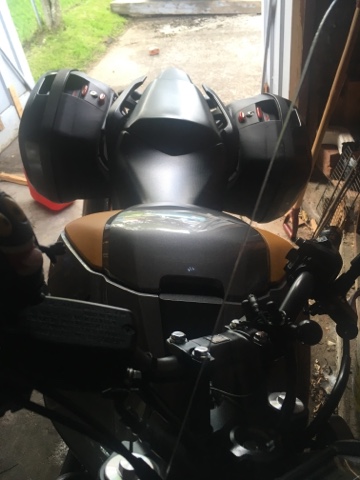 This seat is not conducive to a comfy passenger ride
There is an art to being a pillion passenger, when the passenger does it well and leans with you and doesn't wiggle around or thunk into the back of your helmet it makes for a good ride.  I have yet to take a passenger on my bike and really haven't had a need or a desire to do so.  I think what made it more difficult as well as we were both concerned about the bike bottoming out on bumps and when corning due to the fact that I lowered, so it actually made the ride less smooth and not as fluid as it usually is.  I also have to hand it to those who love riding pillion and are good passengers!

So my question is would you ride pillion? Or do you think you could not handle giving up control?  Got to say the view from the back was not as nice from the front and it was awkward trying to crane my neck around over the hub's shoulder.  I think next time we will take the car ;)
Posted by Dar at 9:54 AM 9 comments: