Mother Nature is not having hot flashes! OH NO ITS SNOW!

Across the Capital Region today we woke up to winter full-on.  Us Victorian's are kind of smug when it comes to winter compared to the rest of Canada because we usually have mild and wet winters.  Through most of Canada they have snow starting around the end of October and last to at least March.  Every once in awhile Mother Nature throws us a curve ball and the city is usually paralyzed be a small amount of snow.  We somewhat learned some lessons in 1996 when we actually had Snowmageddon  and had record snowfall which essentially shut down the capital city for an entire week.  It hasn't been so bad this time around because we are learning lessons on preparing for winter.  I have been scootering all through most of the winter, but the other day I parked Vixen and took the bus, I didn't want to give her or myself any road induced owies.  While most of my motorcycling and scooter brothers and sisters have their babies tucked up for winter I have continued on, they have now had their revenge.
When I was going into work yesterday I saw a young lad on a dual sport motorcycle go zipping by me, he was incredibly lucky because the roads were nothing but ice.  On my way to a meeting after work the temperature had dropped considerably and the roads were slick from the melt and refreeze that was happening.  I just about fell out of my seat when a woman on a scooter coming in the opposite direction went by.  I have to say these two individuals where going on a wing and a prayer because even 4 wheels were having trouble.  It snowed all day yesterday and was just was taste of what we would wake up too this morning, 15cm of snow overnight.  Today was declared a snow day for most public institutions and schools.  Kids were out having fun.  I lived in the Northern half of the Province where snow is an everyday occurrence along with -40 temps on an average winter day, we never got snow days, school was always open, people went to work and went about their business.  The one thing that is different for Southern BC is that most people do not have snow tires, don't have the skills to drive in it and honestly there are a lot of eccentric Vancouver Islanders who think winter clothing is shorts with sport sandals with wool socks, that should tell you how *ahem* prepared we are here.  They are calling for snow tomorrow and then rain on the weekend with warmer temperature.  So Mother Nature I wouldn't mind you getting a few hot flashes and sending them our way okey dokey?! 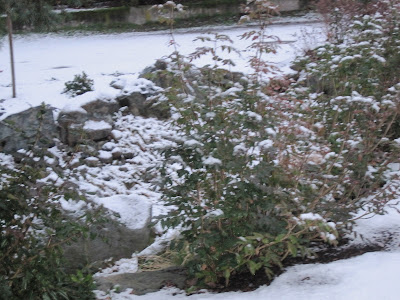 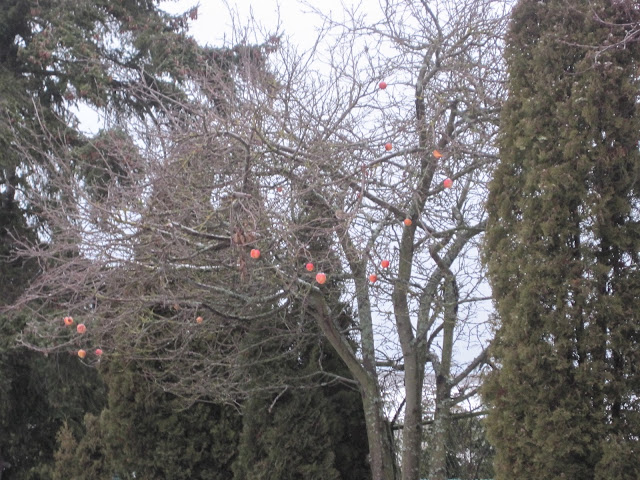 This lovely tree is in the laneway on my way to work, those sad little apples are still hanging in there.The upcoming pictures were snapped from the balcony yesterday throughout the day at work.  Mother Nature seemed to have misplaced her meds because she couldn't make up her mind if it was going to be snowy or sunny all day.  It was quite the day and the adage for Victoria lived up to the saying; "If you don't like the weather wait 5 minutes and it will change."  It was a wild day yesterday. 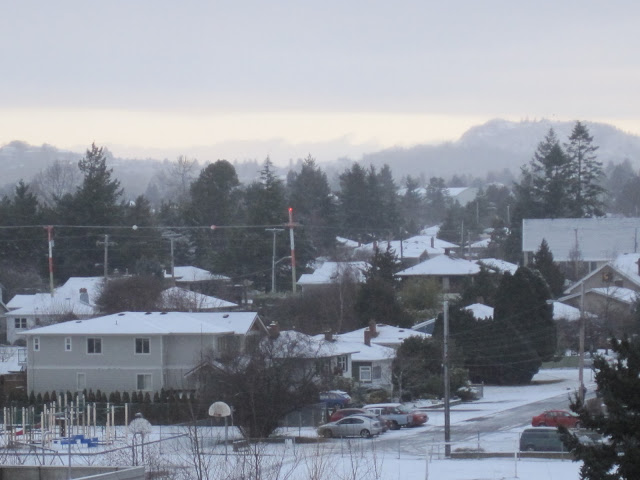 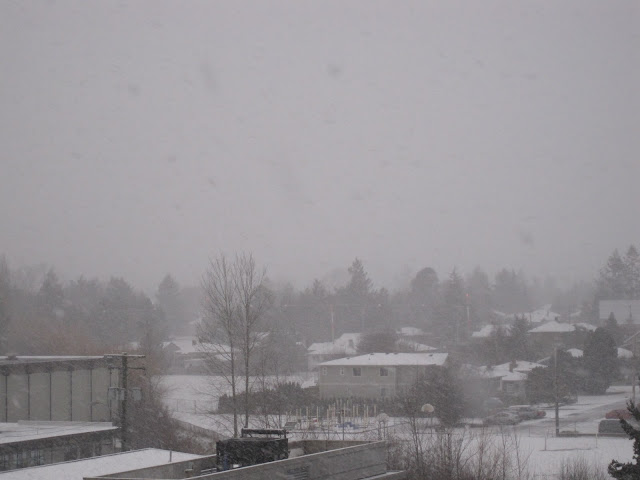 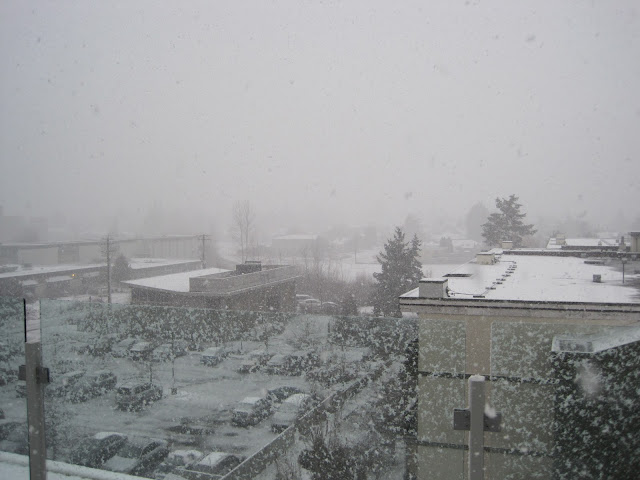 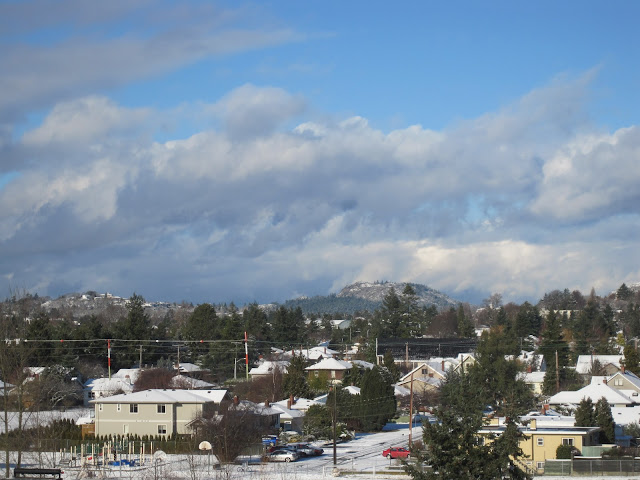 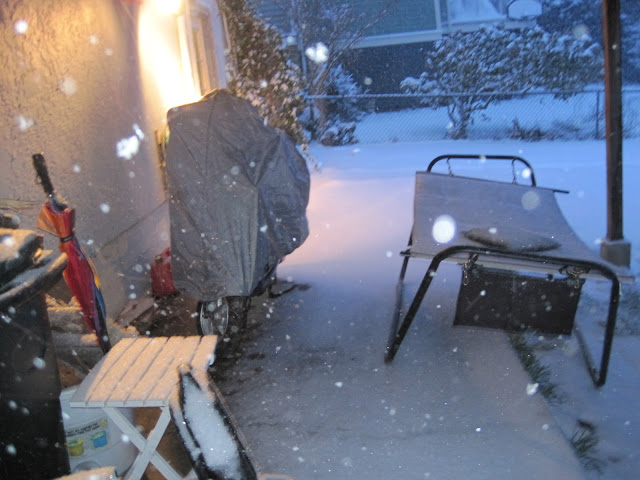 The next pictures are from today.  I went out to Check on Vixen to make sure she was snug as a bug.  Speaking of bugs there is my '74 Super Beetle hunkered down behind our Westfallia "Goldzilla"  I tried to coax Zilla out of the driveway this morning, but she wasn't having any part of it, after 45 minutes I gave up and Motorcycle Man drove me to work to do what I needed to do & then go home.  Unfortunately on my way out to the car at work I slipped and fell hard on my lower back & elbow and smacked my head on the concrete.  I am feeling it now, so much for being a Road Warrior Princess.  I had on good winter boots too! 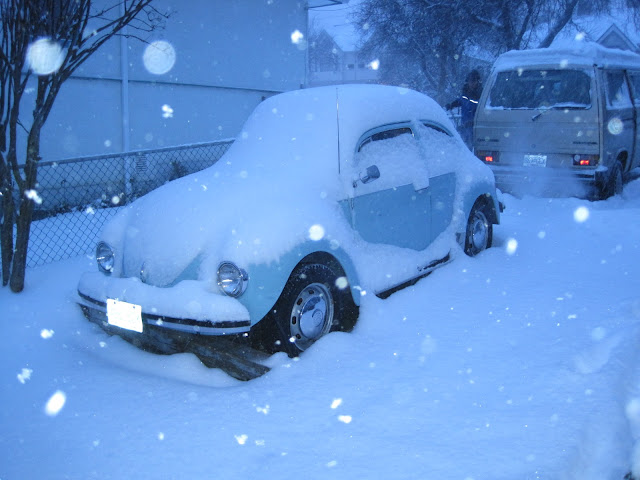 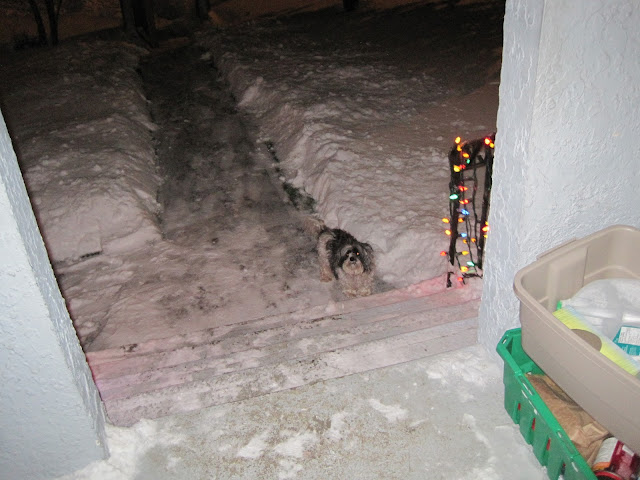 This evenings snow shots and the doggis is out frolicking in the white stuff, for at least 5 minutes anyway! 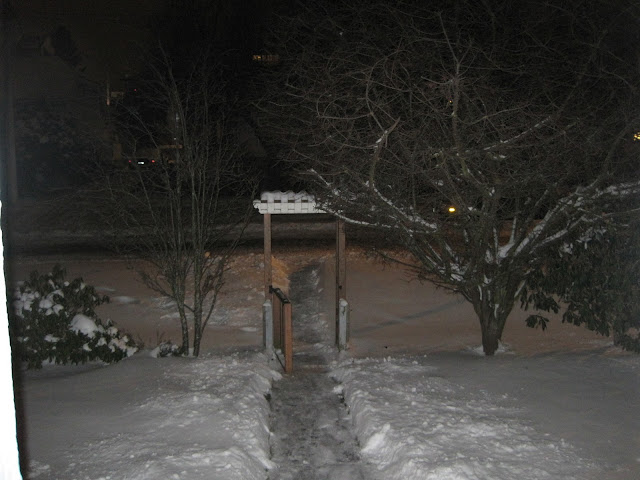 So all of you who are thinking "Well that isn't very much snow at all!"  I am here to tell you in Victoria it is a lot of snow and it is enough to make a city shut down. We are supposed to get more tonight & tomorrow and then we are going to return to the rain bubble again for at least a couple of days, and then we might get more snow.
Posted by Dar at 8:18 PM

Looks like your weather is a mixed bag of tricks.

We never had a snow day the whole time we lived in the Okanagan, but have had several living in Oregon, and then due to only a couple inches on the ground.

Bummer you fell on the ice. Hope you aren't too sore and you feel better soon.

Nice looking bus! I've always liked those and kick myself for not getting the Westphalia Synchro back in 1987. Worth more now that it costs brand new back then.

I hope you recover from your fall quickly. Maybe you need to wear your helmet and gear while walking ;-) No sympathy for the weather here. I walked home from the university today since it had warmed up to -29°F and it really did feel warm. Odd...

I hope your head is okay from your fall. Luckily I have 4 new snow tires mounted and ready to roll. I used to have a Westfalia too, sometimes I miss it, but not the repair bills. All the time I had my Jeep I was dreaming of snow, but it never happened

Heh!
It's lovely here in SC,
but don't ask about this summer.

Trobairitz - it definitely was a mixed bag of tricks and then some! It would snow in almost white-out conditions and then be sunny 5 minutes later. WEIRD!

Richard - LOL I thought about wearing my jacket & pants because they are toasty warm and would keep me dry. Might have been a good idea after all. I hear ya about the cold and seriously don't know how you can cope with such cold temps. If it is any consolation I lived up in Northern BC and -40 and beyond was a regular occurrence, so I have been there!

Bob - I am hoping everything goes as planned, but my daughter is really sick with the flu, so I may have to stay home. All is ok with the fall, my back is hurting, but that is normal after you whack yourself hard. I am definitely tired of Westy repair bills. I will shoot you an email if plans change ok.

Turtle - Glad you are having nice weather, it is terrible here. As for summer ours was terrible last year and I hope because we paid some "snow dues" Mother Nature will be in a good mood and give us some sun & heat. PS - love the cat bed!

Dar - Mother Nature is PMS-ing here. Rain one day, flash freeze the next, then blinding blizzards complete with thunder and lightening but still, we are open for business... hope your head recovers and thank goodness for snow tires and scooters and motorcycles that are tucked away safe and sound!

VstarLady - I hear you about the weather. Today we are getting extremely high winds and it has shut the ferry system down to Vancouver Island, Crazy! I am tired of winter and want it to be summer now!