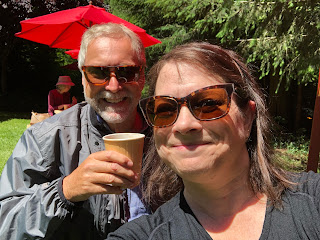 Yesterday we went for a really long ride.  On our anniversary which was the day before I finally insured the Duchess.  We went for a little tootle with a friend, of course it was a 'ride to eat' jaunt.  This is the first time I have looked at my bike and sat on it since last October.  I usually go to the parking lot before I venture out, but it didn't work out that way.  Coffee and goodies was a very pressing matter at that moment. The wonderful thing is that with in a few minutes I was feeling the groove of riding again and the first test was the right hand turn onto the rather large hill by my house, all of that went smoothly. I was riding a little gingerly to give my bike the respect it deserves and for me to get the feel of it again. Very quickly I was getting used to the lean and the familiar feeling of leaning into the curve.  I still love my NC700, although secretly I am coveting my husbands BMW F800GT which he got about a year ago.  It came with a lowered seat and I have been heavily hinting that I would like to take it for a spin, but he seems to conveniently not hear my hint or ignores it.  I get it, it's his baby.  I was pretty picky about who rode the Duchess.  I think what he is afraid of is that I am going to like it so much that we will end up hunting one up for me.  I am perfectly contented with what I have.  *wink wink* 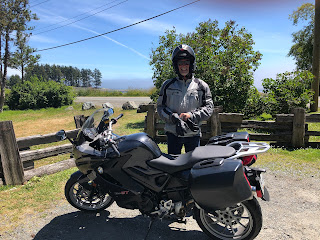 The hubs Beemer
Yesterday was the perfect day for a ramble out into the countryside to our favourite coffee place Shirley Delicious, which is aptly named because it is in the unincorporated town of Shirley. 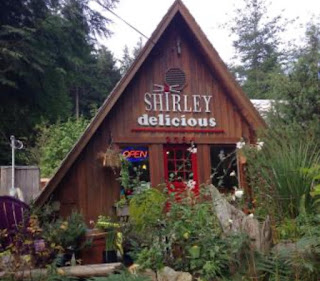 It is an eclectic coffee place offering a wide variety of meals from vegan, gluten free, and regular, if not exotic choices of food. They make the best deserts and their sandwiches are artisan quality it is worth the hour ride out there.  We tend to laze around in the sun chatting out side.  Covid19 has changed the way  everything is done on the island, and it takes. a bit of intimacy out of the experience.  The island is a very foodie place, lots of fabulous places to eat and explore different cuisines. 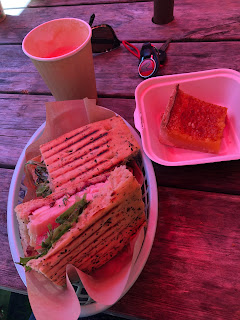 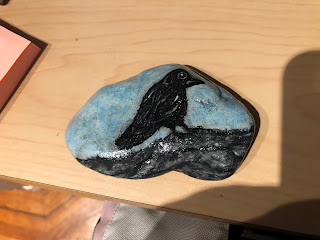 I'm not sure how many in my blog world know that I have discovered a new passion during the pandemic, art.  I have been going through massive changes before the pandemic with my job and am in the middle of a job hunt. The changes started well back in December and ultimately it meant the medical practice I was working at for the last 27 years closed in June.  It has been a topsy turvy time, and a bit of emotional roller coaster, but I am now unemployed and looking for work.  During this time I needed something to channel my energy into and I started rock painting for fun.  Things have rapidly changed with this and an I am delightfully enjoying this new creative outlet and I am being daring and have moved onto painting small canvases.  The reason I mention this is I left these two little rocks out with the owner of Shirley Delicious and they were thrilled to get the  crow and snoozy bee. So back to the road trip part. 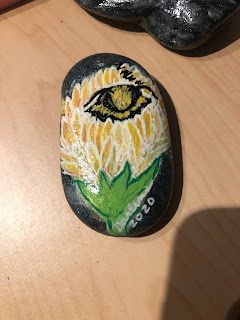 After we finished our delectable goodies we were just going to pop down the road to Jordan River, where I just wanted to pick up a few rocks for painting. 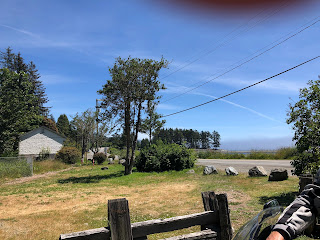 This is the lead off point for the Pacific Circle Marine Route  affectionately known as 'The Loop' to the locals. I could hear it calling my name and we decided to ride! 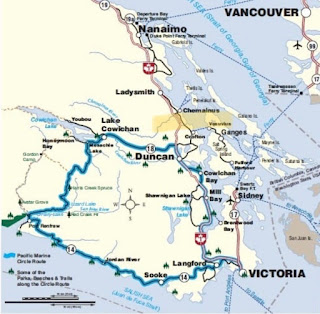 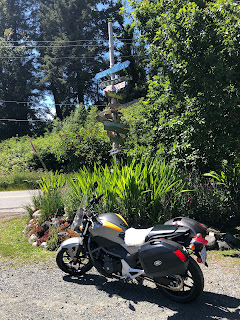 The Loop winds through the beautiful Cowichan Valley on paved logging roads and it's very remote and you lose cellular coverage through quite a few parts of it.  The road is narrow and twisty and have some very high sharp turn areas and many a rider has come to grief out there and it is a little unnerving because essentially you are probably 2-4 hours away from help of any time, so you have to be pretty cautious and follow the road advisory signs.  Anyway that being said it is a magical ride, through beautiful west coast wilderness and forest.  We have being experiencing an abundance of bears on the island, although we didn't see one this trip we did find bear scat several times in the middle of the road.  You kind of don't really want to pull over to the side and whip out your picnic lunch in really isolated spots.  You have to be bear aware in just about all remote regions of BC.  We have had a few grizzly bears swim over from the mainland and they really aren't a native species to Vancouver Island. 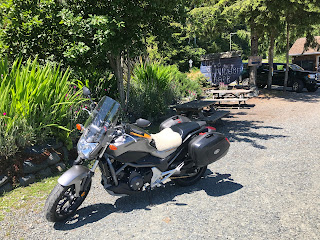 The Duchess waiting for the Beemer 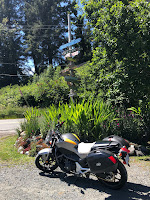 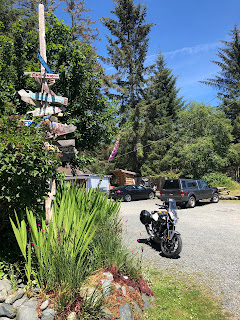 If you were wondering what I was waiting for, hub was adjusting his suspension on the Beemer because he and the daughter were out the other day.  We also took a quick break just to enjoy the cool ocean breeze.  Once you get into the Loop back country the temperature is usually a good 7-9 degrees higher than oceanside. 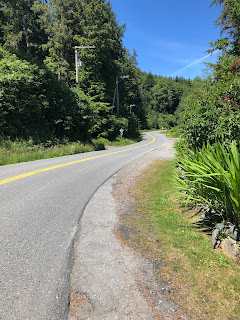 This is the start of the drive up a steep hill and the road gets progressively narrower and very twisty/. Yay Twists! It is 179.63 miles of twisty goodness (300km for us Canucks).  Past this point there aren't many more pictures as we tend to keep riding.  We did not stop at Port Renfrew out of courtesy to the residents, during the pandemic we are limiting our visiting to island spots, particularly remote places as they do not have any medical facilities and we want to respect their communities;  It is also home to the Pacheedaht First Nation, they are known as the people of the Sea foam.  They have the most beautiful campground on their traditional land, wide open to the ocean and it is spectacular.  We thank the Pacheedaht First Nation for allowing us to visit their traditional territory.
After you leave the Pacheedaht First Nation there us a lake with a little lonely tree growing out of a stump, that is the only place we stopped to take a picture. 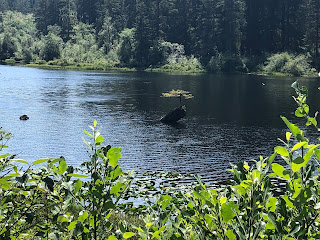 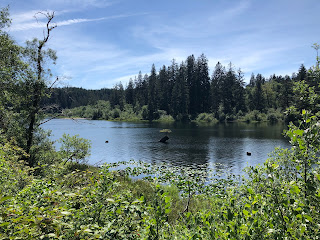 After our picture stop we completed our lovely ride through to Lake Cowichan and then headed to the Trans Canada 1 to get home.  Traffic has been rather light as most people are just staying with in their communities as our restrictions have lifted a bit.  Our provincial authorities are asking us to keep our travel local and within our provincial borders.  We did flatten the covid curve, but we are all very anxious about new cases and we really aren't all that friendly to people from outside Canada at the moment and even inter provincially Premiers are asking Canadians not to travel to other provinces.
All in all if was wonderful to get back on two wheels and have a little wind therapy with my life bestie and we enjoyed ourselves.  We were tired when we got home,  but had big grins on our faces, they type of grin only a two wheeled jaunt produces.
Posted by Dar at 3:54 PM

Email ThisBlogThis!Share to TwitterShare to FacebookShare to Pinterest
Labels: Adventure

Yay! So happy to see you riding again. And that loops sounds like a great ride. We'll have to do it when I visit.

Yes we will! It is such a beautiful ride! Maybe should ride up to Tofino as well, it is spectacular.